We probably all have friends who tell us more about their personal lives than we really care to know. And at some point most of us have revealed something personal that we later wish we hadn't.

When I was a kid in the late '60s and early '70s, CB radio became a huge fad in rural Kentucky where I lived. Everyone had a CB radio in their car, and some had one in their homes. It was a great novelty to be able to talk - actually broadcast - on the CB radio. While some important information about traffic conditions, speed traps, and accidents was broadcast, much of the content was trivial or even embarrassing.

This was exacerbated by the fact that people often considered their transmissions anonymous, even though they had so-called "handles" and were often identifiable. Others did not think about what they were saying at all in the rush to simply have their voices heard on the air.

So when blogging began to catch on, I wondered whether it was just CB radio all over again - except this time in print and available to everyone in the world with a computer connection - not just everyone with a CB radio in a 5-mile radius. CB radios also provided some deniability - if you said something stupid or embarrassing, you could always deny it later, since no one recorded these transmissions.

By contrast, blogs are forever.

The blogging trend coincided with - is there any causation in either direction? - a new wave of confessionals in other media. One of the most notable is the Modern Love column in the NY Times. This column provides a forum for people to write candidly about the ups and downs of their lives, especially their relationships. What is striking about the column is the quality of the writing and the relatively prominent authors who are willing to put themselves out there.

I knew that this genre had hit the mainstream when Debora Spar, a professor at th 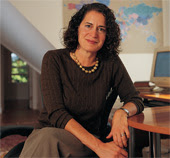 e Harvard Business School, wrote a column about childbearing and adoption. Very well written - and very personal and revealing. Although I don't know her personally, I have taken some classes from her, and she did not strike me as one of those people who are constantly providing "TMI" (too much information). But the column was quite moving, and she was doing a service by writing it.

Hmmm... It will still take me a while to loosen up.
Posted by Dennis Whittle at 2:08 PM