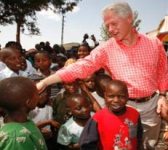 Even when he is not running for office, Bill Clinton sure does know how to campaign. And over the last couple of years, he has been campaigning hard to mobilize people behind the cause of improving the social, economic, and environmental wellbeing of people in developing countries.

Last year, Clinton invited several hundred people - businessmen, movie stars, government leaders, economists, non-profit leaders to a hotel in New York City to take action. He demanded that people make commitments to take real action, and not just talk. The inaugural "Clinton Global Initiative" in 2005 was quite the jamboree of celebrities from all walks of life, and what was striking is that people were actually talking about the issues and not just posing for the cameras.

During one "break-out session," I sat at a table with Brad Pitt, who asked his table mates to explain this thing he had been hearing about called "capacity building." And he was seriously interested.

At the next table, Oprah was deep in conversation about similar topics with another group.

People really had their sleeves rolled up.

In my next post, I will describe some of the things that happened at this year's Clinton initiative.


GlobalGiving]
Posted by Dennis Whittle at 8:45 AM