We don't have to be rich and famous to be great. We all have parts to do and can do something to make a change in someone else's life. I hope others will be encouraged and inspired to find their task in life to help another.

That was one of the reactions to an interview I did with NPR yesterday on a segment called Ordinary Oprahs. This was part of a new series that Michel Martin is piloting called Rough Cuts, which is designed to showcase "new voices" with leading edge ideas.

Michel highlighted two social entrepreneurs based here in Washington DC, Lidia Schaeffer and Wendy Johnson. Both are helping educate children in Africa. Lidia is building a school in her home province in Ethiopia. Wendy takes groups of her friends to countries throughout Africa to support a number of projects. 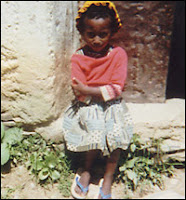 Michel then interviewed me to show that there is now a marketplace - GlobalGiving - that can connect "ordinary Oprahs" like Lidia and Wendy to people around the world who would like to join them and support their efforts financially.

The figure that stuck in my mind as I prepared for this interview was: $50. This is the approximate amount that it takes to educate a child for a year through projects on GlobalGiving.

$50??? At that rate, there are literally tens and probably hundreds of millions of potential "ordinary Oprahs" in the world.

It was a pleasure to be part of Michel's new show. You can listen to the interview here.

Note: Photo courtesy of Lidia Schaeffer.
Posted by Dennis Whittle at 10:43 AM