Do Dogs Use Deodorant? 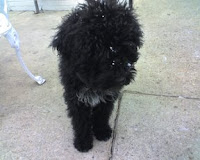 "Dennis, do dogs use deodorant?"

It was a sweltering day out there a couple of Saturdays ago, and I was sitting on the neighbor's porch with Kobe and Alvin. Usually we spend an hour in the morning cleaning up the remnants of Friday night from the sidewalks in our neighborhood. Kobe and Alvin, ages 8 and 11, live nearby, and they work with me to earn a few bucks. Then we usually go to 7-11 to get a drink, or to Ben's Chili Bowl for lunch, or sometimes to the Thurgood Marshall Center to play basketball.

But that day was too hot to work. So we had taken refuge on the front porch next door and were just sitting there in the shade and passing the time doing nothing.

"What do you mean, do dogs use deodorant?" I replied to Kobe.

"Well Alvin says that dogs use deodorant, but I say they don't," Kobe replied.

I didn't know what to say; I just smiled and thought back to those hot summer days when I would sit around with my own older brother, who would spin tales and deliver random facts, many of them made up (I realize now) for his entertainment.

"Some dogs do, and some dogs don't," I told Kobe, and left it at that.

[GlobalGiving]
Posted by Dennis Whittle at 10:49 AM