Bhutan is one of the most backward places on earth, right? As a recent story in the Atlantic points out, TV and the internet made it there only in 1999.

But in another way, Bhutan is one of the most advanced countries on earth: the Government tries to maximize Gross National Happiness (GNH) rather than income (GDP).

For those of us who have spent our lives in the "development" field, here is a dirty little secret: lots of recent research has shown that higher incomes do not necessarily equal greater happiness.

People with incomes below the subsistence line tend to be unhappy for obvious reasons. Over 800 million people go hungry every day, and few of those people would likely call themselves happy. But billions more live above the subsistence line, and for them the research shows that higher incomes often do not necessarily translate into more happiness. 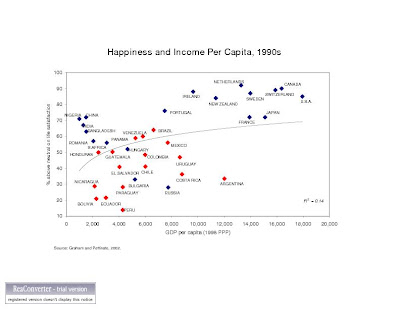 Consider this graph (click on it for greater detail). It plots GDP per capita (X axis) against happiness (Y axis). The bottom line is this: if you live in a country with a GDP per capita of $10,000 or more, you are happier.

Happiness instead seems to depend much more on one's income relative to their neighbors than it does on one's absolute level of income. For example, Richard Layard reports on the following study. Grad students at Harvard School of Public Health were asked:

Which would you prefer:

The majority preferred A!

I will be pondering this phenomenon in future blog posts, but in the meantime, i 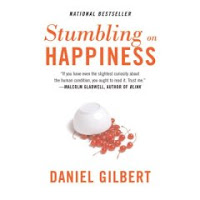 f this topic interests you, I strongly recommend Daniel Gilbert's Stumbling on Happiness, which just came out in paperback. It sums up much of the recent research, and is very funny to boot.


[GlobalGiving]
Posted by Dennis Whittle at 11:55 AM