In praise of defiance 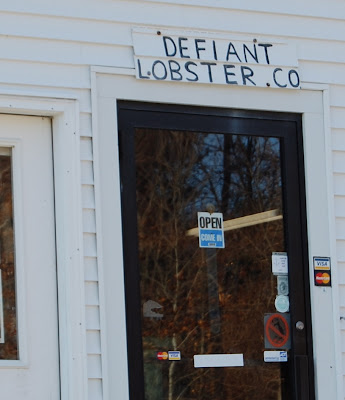 That was what an old lobster fisherman outside of Hampton, NH told Mari this past weekend. We were on our way to the beach with my family and saw a hand-lettered sign that read “Lobster” and pointed down a gravel road. My brother was visiting from Guatemala, and he really wanted some lobster, so I took a right and wound around the back of a house to a small clapboard building at the edge of an inlet. There were lobster traps and other fishing paraphernalia stacked in the yard.

Above the door of the building was a sign that said it all: Defiant Lobster Co.

We went in and asked for lobster. The man told us that he did not have any. He said that it was the off-season for the NH lobsters, and that he usually bought lobsters from Maine during this time, but that the wholesale price was too high.

“Wholesale prices are over $9.00 a pound, so I would have to charge people $10.50 a pound. And I just won’t do that. I have been lobstering for over fifty years, and I have never seen prices this high.”

I was stunned. First, that he would only charge a $1.50 markup. And second that he would simply refuse to sell something at a certain price. The economist in me was doing backflips.

I spend a lot of time in Silicon Valley, where the talk is all about “scalability” and “margins” and “pricing power.” This lobsterman had pricing power over me – that’s for sure. I would have gladly paid $10.50 a pound or more, because I was in a hurry and really wanted that lobster.

But the lobsterman was not a profit maximizer – he wanted to make a decent income, but he also had a sense of what I have come to call market “aesthetics.” He would not participate in transactions that he felt were not right in some way.

This reminded me of a time in Indonesia when I was having a big dinner party, and I needed a whole lot of avocados. I went to a small stall at the market and told the man I wanted his whole stock. “I can only sell you ten,” he told me. “What? Why not all of them?,” I asked. I thought he would be overjoyed to sell them all at one time. “Because," he responded, "if I sold you everything I had, sir, I would have nothing to do for the rest of the day.”

Back in Hampton Beach, I thought about arguing with the lobsterman. But instead, I talked to him about the ups and downs of the lobster market over the decades - something I could never have done at the local profit-maximizing supermarket. And then I bought some really nice clams and oysters from him (at a price he considered fair), and I took them home. They were very good. 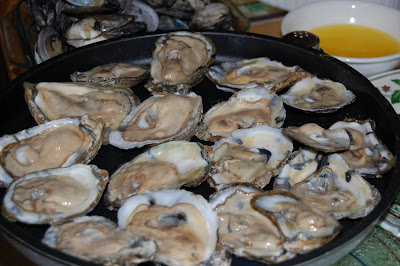 Posted by Dennis Whittle at 9:34 AM