At SnagFilms.com, you can watch full-length documentary films for free, but we also make it easy for you to take our films with you and put them anywhere on the web. When you embed a widget on your web site, you open a virtual movie theater and become a “Filmanthropist.” Donate your pixels and support independent film! And click on “info” on any widget to learn more about that film and a related charity you can also support.

Donations to the related charities are processed by us at GlobalGiving.  Walt Mossberg did a nice piece about Snag Films in the Wall Street Journal.

[GlobalGiving]
Posted by Dennis Whittle at 10:57 AM | Permalink 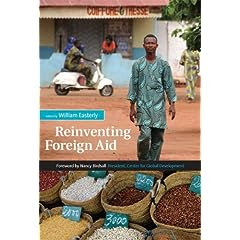 I am happy to announce that Reinventing Aid has been published by MIT Press.  Edited by Bill Easterly, it is a collection of essays (including one by Mari and me) that point the way toward a new approach to foreign aid.
The introduction by Bill is by itself worth the price of the book.  I will use it the next time I teach a class on international development.
Many of the individual chapters are also outstanding and are highly recommended for more advanced readers.  (Send me an email for recommendations.)
[GlobalGiving]
Posted by Dennis Whittle at 9:55 AM | Permalink

A New Shade of Cool

Today we launched GlobalGiving Green - a new part of the site that highlights projects that BOTH fight global warming AND improve local economic, social, or environmental conditions.

Stephanie Strom did a very nice piece about it in today's New York Times.

It's only a first step, but an exciting one that could potentially have far reaching effects, as you can read in the Times article. Mari is in the process of writing a longer piece about why it is critical to help get developing countries on a sustainble carbon path.

Two big shout outs on this one - first to the Packard Foundation, which encouraged and helped fund this. And second to Joan Ochi, Stephanie Fischer, Georg Apitz, and other colleagues here at GlobalGiving who worked so hard to create this.

My grandmother ("Mood") turned 99 this past week, and Mari and I went to visit her at the nursing home in Manchester, NH.  For several years, Mood has suffered from dementia, and she doesn't recognize her family members.
We've gotten used to it, though at the beginning it was wrenching.  As with many elderly people, she has stronger recall from the distant past, and until last year she was able to remember stories and songs from her youth in the 1910s and 1920s.  She would also respond to questions in Finnish, her parents' native tongue. But for the most part, she had a distant look in her eyes when we visited her.
Early this year, Mood took a sharp turn for the worse, and stopped eating or responding to any verbal interactions.  She lost a lot of weight and became extremely gaunt.  On our previous visit a couple of months ago, I was shocked to see her wasting away in bed. The nursing home staff told my mom that the end was near, and we decided to commence hospice care.
Over the next couple of months, the caring hospice people came several times a week to spend time with Mood - talking to her and stroking her arm - notwithstanding her lack of apparent response.  My mom called to say that Mood was improving, and even sitting up in a chair.
Mari and I sat opposite Mood on our visit last week, and I searched in vain for a connection with her.  Nothing worked.  I could remember only one word of Finnish.  So finally I just decided to ask her:  "Mood, do you know how old you are?"  No response.  My mom told me that I would have to shout, since her hearing was bad.
"MOOD, DO YOU KNOW HOW OLD YOU ARE?" I practically yelled.
Mood cocked her head suddenly, and her eyes cleared.
"Sixteen," she responded impishly, with a slight smile.
Then she was gone again.  So we sat there some more, and I rubbed her arm, and my sister called from Seattle and sang some songs to her, and Mood's head nodded slightly with the beat as she stared into the distance.
--
In honor of Mood's birthday, my mother and uncle made a donation through GlobalGiving to Help Feed 200 Neglected Elderly in Guatemala.  I was happy to see that they joined 58 other donors who together have provided enough money to feed over fifty women for a year.
[GlobalGiving]
Posted by Dennis Whittle at 10:37 AM | Permalink

[GlobalGiving]
Posted by Dennis Whittle at 10:59 AM | Permalink