Mario Morino posted a nice piece recently about the need to nurture "coral reefs" for innovation in the US. I like his metaphor very much. He notes we don't know how to create reefs from scratch. Silicon Valley and other innovation centers such as the Research Triangle in NC, the Boston/Cambridge area, and the Seattle/Richmond area have grown organically, without a lot of top-down planning or intervention. The key, Mario notes, is to make sure that conditions are favorable for these reefs to grow, and to avoid disturbing or destroying them when they emerge.
Though Mario is making the case for innovation in the broader sense, it is particularly relevant to developing countries. Per capita income throughout the world was more or less the same from the beginning of recorded history to the early 1800s. People struggled to produce enough to survive. In the early 1800s, a variety of technological and institutional innovations drove an incredible increase in per capita income. These innovations increased output beyond what was needed for immediate consumption, and the surplus could be re-invested to produce even more output in the future. Continued innovation meant that the returns to each unit of invested surplus (ie productivity growth) kept increasing as well. 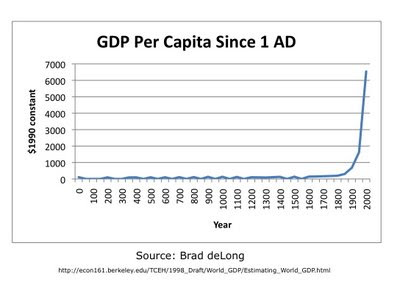 Few of us realize the extent to which we live in a period of unprecedented affluence. But the picture looks very different for people who live in what we call developing countries. Here is a comparison of growth in per capita for developed vs. developing countries (click to enlarge):

The astounding gap between growth in developed vs developing countries is hard to explain. There have been many schools of thought over the years, but most have turned out to provide few useful insights about how to spur faster growth in developing countries.
The whole international aid field is built on the notion that the developed countries can invest additional capital into the developing countries to accelerate the latters' rate of growth. Unfortunately, the returns to the $2 trillion in aid spent over the last 50 years have been disappointing. Some studies show zero return, while other studies show a positive, but small return. No one questions the fact that there has been little or no productivity growth in the returns to the aid spent.
The low or zero productivity growth for aid reflects the lack of innovation in the field, which resembles the world economy pre-1800. But there is hope: when Mari and I did the first Innovation and Development Marketplaces at the World Bank ten years ago, we accidentally tapped into an exceptional well of innovation that the current aid system is ignoring.
The prescription here is clear: "Physician, heal thyself." The top challenge for the aid system is to infuse innovation into its own DNA. GlobalGiving is a first step in that direction, and we are planning many new features in the year ahead. There have been other admirable new approaches arising out there as well. But much more needs to be done to bring the aid business into the modern era.
[GlobalGiving]
Posted by Dennis Whittle at 4:57 PM