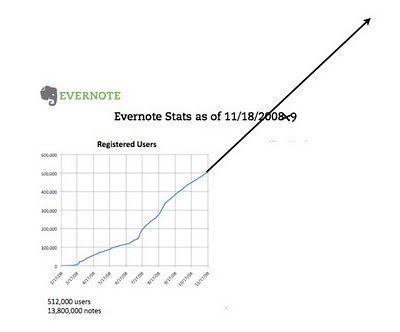 Earlier I wrote about how a small change in the external environment can turn a modestly successful product into a runaway success.  The example was Evernote, a software program that allows people to store and synchronize information across their various devices.  Evernote's user base grew respectably after launch, but nothing special.  In June 2008, they had about 100,000 users.

And then the iPhone App Store launched, which turned out to the be the perfect distribution and application platform for the software.  By November 2008 they had 500,000 users.  And recently the NYT reported Evernote had surpassed 2 million users - fully half of which are iPhone users.

As usual, there may be other confounding factors that explain the growth, so this is not conclusive.  But it does reinforce the importance of persistence in entrepreneurship and the introduction of new products.
Posted by Dennis Whittle at 5:43 PM