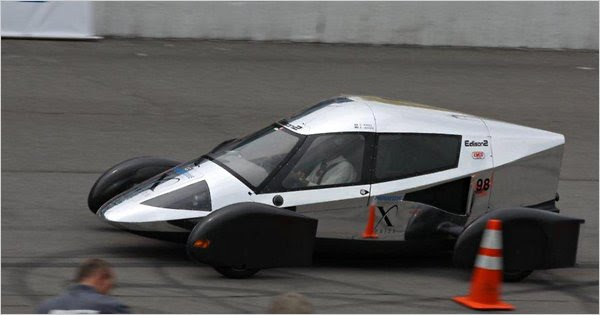 Teams from Virginia, North Carolina and Winterthur, Switzerland, with roots in the world of auto racing have won the first Progressive Insurance Automotive X Prize, the $10 million competition aimed at advancing the technology for more fuel-efficient vehicles.

That is from today's New York Times.   One of the benefits of challenges like the X Prize is that anyone can participate, and often the winners come from non-traditional places.  In this case, who would have thought that the winners would come from the auto racing industry, which is known for sacrificing fuel consumption in favor of speed.  And while the second and third place winners used electric engines, the first-place team relied on a not-so-new approach called internal combustion.

The timing of this is appropriate, since I am speaking today at the NCOC's Civic Innovator's Forum, co-sponsored by the Case Foundation, which has done what may be the leading analysis of promoting innovation through challenges and competitions.  Check it out - and while you are at it, check out GlobalGiving's own Global Open Challenge, which is now underway.
Posted by Dennis Whittle at 7:57 AM