Show Me The Money! 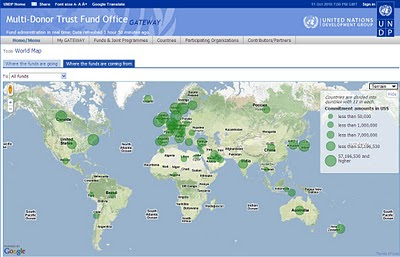 Sometimes we reach our desired destination by taking an indirect route.  That is the key theme of John Kay's new book Obliquity.  And it was on my mind over the last two days at a meeting of the International Aid Transparency Initiative (IATI), a consortium of donors promoting greater transparency in international aid funding.

IATI has made much more progress than I imagined possible, and I left the conference encouraged by the possibilities and by the people working on it.

One of the presentations was particularly striking, because it demonstrated John Kay's point. A representative from UNDP showed the system they had designed to track trust fund budget flows.  They created the system because UN country offices were complaining that the trust funds they had been allocated were not being disbursed to them in a timely way.  As a result, programs were delayed.   Under the old system, it was hard to tell if the problem was in the implementation or in budget availability. And if the problem was the budget, was it because the donors had not paid up, or was it because of some delay at headquarters?  So they set out to make the flow of funds in the system available in near real-time to relevant UNDP staff.
After they designed this beautiful system, they then realized it would be useful to a larger group of people within the UN system.  At this point, they started thinking about who should have access and who should not.  The answer to this was no obvious, and in any case the complexity of creating and managing an restricted access system was substantial.  So the UNDP team asked itself "Is there any reason not to just make it open access?  That would sure make our lives easier."
And it turns out there was no good reason not to do this.  The result is that anyone in the world - beneficiaries, recipient governments, aid workers, donors, and taxpayers can all see where billions of dollars of UN trust fund money is coming from, and where it is going, what it is for, and when it arrives.
So this was an example of an initiative that created unprecedented transparency at the UN.  But it didn't start out that way.  It started out as an initiative to solve a problem within the agency itself, and because it solves that problem you can be sure it will be properly maintained and sustained.  I left the IATI meeting wondering how such an indirect approach can be pursued in other dimensions of the information we need to make transparent.
Posted by Dennis Whittle at 7:53 AM