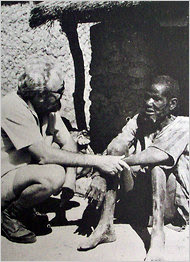 "René Le Berre, a French entomologist who helped inspire an international campaign that saved millions of West Africans from the parasitic disease river blindness, died Dec. 6 in L’Aiguillon-sur-Mer on France’s western coast. He was 78.

Onchocerciasis, the formal name for river blindness, had once been a scourge in the fertile river basins of tropical Africa."

That obit is from the NYT.

When I joined the World Bank in 1986, my first memory is of my colleague Bruce Benton yelling in French over the phone across the Atlantic to Dr. Le Berre.  I remember wondering what he was yelling about.  Bruce did not join many meetings or participate in the various fads and "sexy" initiatives in the Bank.  He just steadily and consistently worked with Dr. Le Berre and his program for twenty years, from 1985 to 2005, saving hundreds of thousands of lives, sparing millions of children from affliction, and reclaiming millions of hectares of land for habitation and cultivation.  All at a nominal cost, representing a tremendous return on investment.

A very nice brief by the Center for Global Development on the impact of the river blindness control program is here.
Posted by Dennis Whittle at 1:26 PM