Got to Admit it's Getting Better 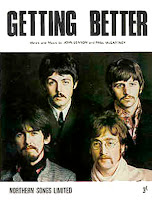 Over the last one hundred years, the physical well being of the world's population has improved far more than in all of the previous natural history of humankind.

Charles Kenny's recent book Getting Better is an antidote to the pessimism many of us feel about the state of the world.  Those of us in international development f are frustrated we have not been able to find a toolkit of approaches that reliably increases growth in poor countries.  Kenny acknowledges this frustration, but shows that many indicators of wellbeing have improved rapidly even in the absence of consistent economic growth:


Global average life expectancy increased from around thirty-one years in 1900 to sixty-six by 2000.

In terms of GDP, there is an increasing divergence among countries in the world, with many of the poorer falling further and further behind.  But with respect to other indicators of wellbeing, there is a striking convergence.  Infant mortality has plunged by over half in eighty percent of the world's poor countries in the last fifty years.  Literacy rates in sub-Saharan Africa rose from 28 to 61 percent from 1970 to 2000.  Some very poor countries such as Vietnam have achieved 95% literacy.  Democratic ideas and practices are spreading rapidly (notwithstanding big setbacks and uneven progress), and violence is way down: global homicide levels, for example, are about one-third of what they were in England in the Middle Ages.

How can this be?  It turns out that it is not very expensive to improve these aspects of wellbeing. This is because of tremendous innovation in technologies and ideas in some domains, ranging from vaccines to understanding germs to oral rehydration therapy to increased agricultural productivity.  In the old days, even the wealthiest and most powerful of kings died early for lack of the cheap modern vaccines that keep the most vulnerable and poor people alive today.

Getting Better is full of facts and figures such as these.  Kenny neither minimizes the remaining problems (poor people do have fewer opportunities and poverty does equal misery for millions of people), but he does want to zoom out and take the long view so we can see we are making progress.  He does note that the spread of even the cheap and effectives innovations he discusses has been uneven - and thus there is great scope for further progress.

Progress must often come on the demand side rather than the supply side, Kenny argues.  In many (not all) cases, there is enough money in the budget for education and health programs, but people don't demand the right services for lack of knowledge about their potential effects.  How to do better marketing is thus a key challenge for the aid business - an area in which we have made only modest investments.  Relatively small investments in transparency measures can also help stimulate demand as well.  Local people are often told that there are not enough resources in the budget to do X, Y, or Z, but once local people are able to see what the money is actually being spent on, they are able to bring to bear pressures to get what they need.

Kenny closes the book with suggestions for how to catalyze the flow of ideas and hasten the uptake of innovations in health, education, and other areas.  This is the weakest part of the book, but at least he is offering a framework for further analysis and experimentation.  The bad news is, as Kenny says, we don't know how to make people financially richer. The good news is that we do know how to make them better off, and that fact should motivate us all.