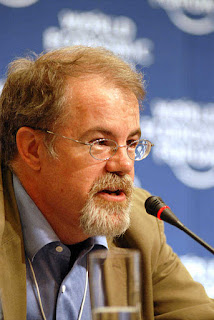 If there were a Top 1 List of Thinkers about Development Aid, Bill Easterly would probably be on it.  There are now several excellent development economists publishing (and doing!) micro-level work on a variety of subjects, but none is influencing the overall debate more than Bill.  His birds-eye, macro-level take on the aid industry is slowly but surely changing the way people think.

Bill joined the World Bank in 1985, and over time he realized what many of us did: namely that many of the most ambitious aid projects were failing to have much impact.  And then, in the late 1990s, he did what none of the rest of us had the guts to do: he wrote about it,  in a seminal book, The Elusive Quest for Growth, and in an article in the Financial Times.  His courage led to his involuntary departure from the World Bank soon thereafter.

Over the past decade, Bill has tirelessly and relentlessly picked apart - on both theoretical and empirical grounds - the idea that top-down and expert-driven projects work.  He coined the term Searchers vs. Planners, and drew analogies to how well functioning economies work compared centrally planned economies.  His work offended not only his former employer, but also many of the new foundations that were created with money from very smart and successful entrepreneurs.

To draw attention to the debate, Bill has employed a number of rhetorical devices and flourishes that have rubbed a lot of people the wrong way.  But I am struck by how often people in big aid agencies have told me that, to be honest, they agree that their own institutions - and leaders - are stymying new ideas and experimentation.  "If only they would let me try X," is a frequent lament.  And over the last few years, I have noticed a significant increase in the number of people in big agencies (especially the World Bank) giving access to new ideas from different sources.  There is increased understanding that innovation comes from iterated, experimentation; and that failure is necessary for success.

This week, a Kenyan economist published the results of a randomized controlled trial of a Millennium Village Project (MVP) in her country.  The MVPs are (hopefully) the last hurrah of the big top-down approach to development.  The study found, in the words of Michael Clemens of the Center for Global Development:

Because this project is large and intensive, spending on the order of 100% of local income per capita, it is reasonable to hope that it might substantially raise recipients’ incomes, at least in the short term...Wanjala and Muradian find that the project had no significant impact on recipients’ incomes.

The reasons for the failure (you can read the whole post here) is one that many aid workers have learned over the past decades of traditional aid projects.  The reason would have been obvious to the villagers,  if their views had been genuinely solicited.  But it is surely a surprise to the planners who designed the project.  Too bad they did not consult Bill.

Posted by Dennis Whittle at 5:38 PM