One hundred and three years ago yesterday, my mom's mother, Neima Linnea Lepisto Johnson, was born.  Her parents were Finnish immigrants to the Fall River, MA area in the early 1900s. The Finnish word for Grandmother is "Mummu," which we shortened over time to "Mood."

Yesterday, Mood died in her sleep at her nursing home in Manchester, NH, where she had been a resident for many years.

One of my first memories of Mood was when she and my grandfather ("Opa" - the son of Swedish immigrants) arrived at our house in Leitchfield, KY by car in summer of 1967 or '68.  We ran out into the yard to greet them, and she opened the trunk and pulled out a croquet set.  We were overjoyed, and we played with that set for many years.  There are probably pieces of it still in my mom's basement somewhere.

Her visits were always a delight.  On one trip, she taught me how to play the piano (I remember, in particular, "See the witch / Fly through space / On the moon she has a base...").  On another, she taught me how to knit (though she later discouraged me from continuing, telling me that it was for girls!).

There has been a lot of talk lately about the importance of persistence in life.  I didn't appreciate how much Mood embodied that lesson until I ran across her report card from 1923-24.  She was struggling in the first reporting period (Sept-Oct), maybe because her father had died.  But look what happened by the end of the year (click to enlarge).  By any measure, Mood was a straight-A grandmother. 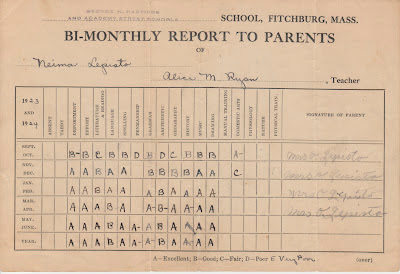 Posted by Dennis Whittle at 3:33 PM