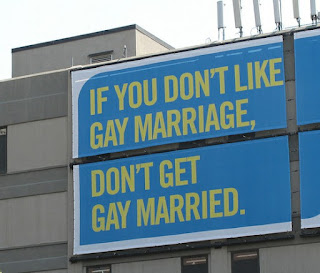 Yesterday I went to a fundraiser to support the new Maryland law extending marriage to same-sex couples. As I wrote out my check, I suddenly stopped and thought how archaic the whole thing felt. How, in the year 2012, could this struggle for equal rights still be going on? It felt ridiculous.


Over two hundred years ago, the founding fathers of the new United States declared independence.  In doing so, they said that they found certain truths to be "self-evident."  Namely, that "all men are created equal, that they are endowed by their Creator with certain unalienable Rights, that among these are Life, Liberty, and the pursuit of Happiness."


The last two hundred years have been a steady struggle to realize the ideal set out by our founding fathers.  In one sense, the progress we have made is heartening; whatever our country's faults, it has shone a light for equal rights for the whole world to see, and in doing so it has been an inspiration for many.  But in another sense, it is disheartening to see how long it has taken for slaves, women, blacks, and now same-sex couples to attain the rights that they deserved all along.

There will be bumps in the road and political and legal setbacks for the marriage equality movement in the months and years ahead.  But soon, same-sex rights will be secured, and we will all look back in amazement that it took so long.  Those who voted against these rights will feel embarrassed in front of their grandchildren, in the same way those who voted for Jim Crow laws aren't able to look their grandkids in the eye.