What Star Trek Can Teach Us About Having it All 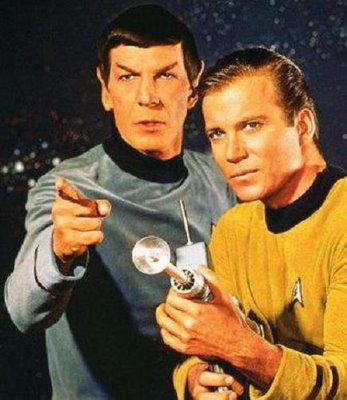 Watch a political talk show on TV, and chances are you will see people talking - often yelling - past each other.  They don't actually listen to what the others are saying, because their main objective is to score points, win the argument, or advance an agenda.  Rarely do you hear the words "Oh, I see what you are saying - that's a fair point.  In fact, because of what you just said, I want to modify my stance to better reflect reality."

I was reminded of this when I read all the hullabaloo surrounding Anne-Marie Slaughter's recent piece in the Atlantic about the impediments to women "having it all."  This followed on the heels of Sheryl Sandberg's speech last year exhorting women to step up to the plate and make the effort and sacrifices necessary to rise the the most senior positions in business and government.

Slaughter's piece resonated with a lot of women, because she talked candidly about the challenges that even she (as a privileged woman) faced in playing at the A level in the foreign policy arena in Washington.  She pointed out how much more severe the tradeoffs are for the vast majority of less well-off women who aim for professional achievement as well as having a family.  She ended with thoughts on how some changes in work practices and norms could help alleviate some of the tradeoffs.

Other readers were furious; they read the article differently.  Lori Gottlieb, for example, perceived Slaughter as arguing (some even said "whining") that women should be able to have it all without making tradeoffs.  Friends of mine whose opinion I respect a lot, such as Bill Easterly, had the same reaction, and many pointed out that men have to make tradeoffs as well. Susan Chira, a senior executive at the New York Times, weighed in too.

Clive Crook (who falls into the Gottlieb camp) was the only one I heard make a sensible suggestion to advance the conversation.  He found himself at the Aspen Ideas Festival with both Slaughter and Gottlieb, and he wondered why Slaughter couldn't be interviewed by Gottlieb instead of by Katie Couric, who was scheduled to do it.  Aspen is the type of place where interviews are often actual conversations, so a real opportunity was missed.

Contrast this with what happened after Isaac Asimov wrote an article criticizing Gene Roddenberry, the creator of Star Trek, for scientific inaccuracies in the script.  Roddenberry responded, sharply at first, acknowledging some of the points but also telling Asimov how hard it was to get Star Trek on TV in the first place, and arguing that some compromises were necessary to make it onto the airwaves at all.  Instead of devolving into a pissing match, the relationship with Asimov and Roddenberry evolved into a friendship and even collaboration on, for example, the interplay between Captain Kirk and Mr. Spock as the series matured.

Real conversations don't always lead to kumbaya.  Far from it.  Instead, they sharpen and illuminate differences, and they shed light on the topic from new angles.  Best of all, good conversations can generate new alternatives that neither side had previously thought of.  Clive Crook is a superb host of such generative conversations on a range of topics.  What if The Atlantic convened Sheryl Sandberg, Anne-Marie Slaughter, and Lori Gottlieb in a conversation led (and prodded along) by Clive?  Now that would be an event worth waiting in line to watch.

-------
*Disclosure:  I know Slaughter, Easterly, and Crook; I have met Sandberg a couple of times. I have never met Lori Gottlieb, but I have read articles excerpted from her book Marry Him: The Case for Settling for Mr. Good Enough.
Posted by Dennis Whittle at 3:15 PM